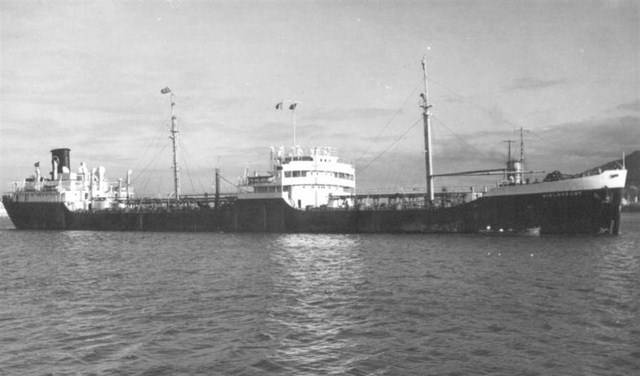 The T2-SE-A1 Type
The most common variety of the T-2 style tanker was the United States Maritime Commission type T2-SE-A1, a commercial design already being built by Sun Shipbuilding Company for Standard Oil Company of New Jersey. There were 481 of these built between 1942 and 1945. Propulsion was provided by a turbo-electric drive. This consisted of a steam turbine generator connected to a propulsion motor to turn the propeller, thus obviating the need for a large main reduction gear, which would have taken quite a lot of time and Machinery to produce, Machinery that was already busy making these gear sets for naval vessels. These ships were built by Alabama Drydock & Shipbuilding Company of Mobile, Alabama, the Kaiser Company’s Swan Island Yard at Portland, Oregon, the Marinship Corporation at Sausalito, California and the Sun Shipbuilding & Drydock Company of Chester, Pennsylvania in extremely short production times. The average production time from laying of the keel to completion for sea trials was about 70 days, including 55 in the building ways and another 15 in the fitting out dock. The record was held by Marinship Corporation, completing S.S. Huntington Hills in just 33 days; 28 days on the way and 5 days of fitting out!

These ships were 523 feet 6 inches long, 68 feet abeam and carried a gross rated tonnage of 10,448. Tonnage tonnage was 16,613 and they displaced about 21,880 tons. The turbo-electric propulsion system delivered 6,000 shaft horsepower, with a maximum power of 7,240 horsepower giving a top rated speed of about 15 knots with a cruising range of about 12,600 miles. (The A2 and A3 versions of the T2 had 10,000 SHP propulsion Machinery, developing a top speed of 16 knots.) The propulsion Machinery was produced by the General Electric Company, Lynn MA; the Elliott Company, Jeanette, PA; and the Westinghouse Electric and Manufacturing Company of Pittsburgh, PA.

The T2-SE tankers were not the first to have turbo-electric propulsion, nor was it a novel innovation. During World War I there were several commercial ships and some naval vessels propelled by turbo-electric plants. In 1938, some tankers built for the Atlantic Refining Company of Philadelphia, PA by Sun Shipbuilding Company were given turbo-electric plants. S.S. J. W. Van Dyke and S.S. Robert H. Colley had General Electric equipment giving them 6,040 SHP and a top speed of about 13.5 knots. Atlantic Refining had five more of this type of ship built.

The T2-SE-A1 had 9 sets of tanks. Tanks 2 through 9 had a main center tank carrying 391,500 gallons, and two side tanks (one port, one starboard) carrying about 165,000 gallons each. Tank number one consisted of only two side by side tanks, divided by a common bulkhead, as this tank set was only 13 feet 6 inches long. Tank sets 2 through 9 were 36 feet 6 inches long. Total cargo was about 5,930,000 gallons, about 141,200 barrels. There was also a small dry cargo space of about 15,200 cubic feet located forward of Tank Number 1 above the deep tank for a very small amount of dry cargo. There were two pumprooms, one forward and one aft. The main pumproom was aft, and contained six pumps. There were three large capacity pumps of 2,000 gallons per minute which were driven by electric motors located in an adjacent Machinery space. There were also two 400 GPM pumps and one 700 GPM pump. In the forward pumproom was one 700 GPM pump and and 300 GPM pump which were reciprocating pumps used for fuel transfer and stripping.